January 02, 2018
Feeling ready and excited for what’s next and at peace with what’s been. I believe 2017 was a really really great year. I achieved a lot of goals like practicing mindfulness more, living with grace, and working smarter not harder. It feels freeing and joyous almost to look back on a soon to be old new year and say damn, I rocked my intentions I set for 2017.

Hunter and I got married this year and it was pretty amazing. We celebrated being together for 10 years first and then hosted a wedding dinner party to commemorate. We could not be happier with how everything turned out. Food was delicious, all our favorite humans were in one space, and that space came together to represent what we envisioned all along. Love that 2017 is the year of the #VeryMarriedMunterhegans. And honestly, not much has changed; he still leaves socks just outside the hamper and I still update his daily to-do list 3 times. 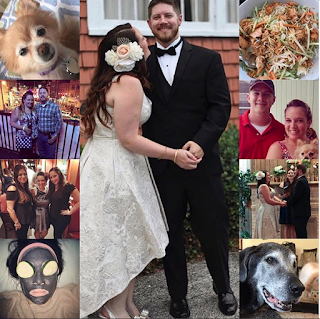 2017 was also difficult. My mom injured herself at work and spent the better part of the year coping with excessive pain and attempting to heal. Due to additional surgery needed, her injury repair and healing time will roll into 2018. I’m hopeful she will feel better than ever sooner than later. She’s been a good sport but I hate seeing her in so much discomfort.  Hunter’s mom also has the same kind of injury as my mom! They did it months apart and both have been true champs trying to get back to their usual abilities.

Our sweet Pepper girl went to sleep in late October. She was tired and just reached a place of no return for feeling far less than her best so we made the call and it was the hardest adult decision I’ve made this far. October is otherwise my very favorite month and I’ve only ever associated it with so much goodness. In a weird way, I do have peace Pepper will he celebrated this time of year now too. She was one of the greatest best friends I’ve ever known and we miss her beyond explanation.

2018 will be beautiful, full of challenges and abundances alike and I personally am pumped. Let’s do this.

I'll leave you with a smidge of new year inspo: 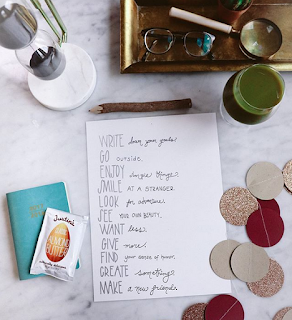