October 14, 2014
This memory from childhood is probably one of my parents most embarrassing memories of their sweet little angel cake Meggie and I must say that no harm was meant in any regard. I really did mean it in the most loving way possible. While funny, hysterical even, it was also mighty mortifying too. I do remember it vividly, I was just old enough to. So without further stalling, enjoy!

For several years in a row when I was a little girl, we would go to the circus that came to a nearby town. It would come every January around my Poppy's birthday and he loved to take me there. That's just one way to know what a good man he was; he owned a restaurant that was open six days a week and would take one of his few days off a year to go because it made me ecstatic. One year though, he may have regretted that choice...

We had a routine; we would get there, walk the entire tent and little Meggie would have arms full of cotton candy, stuffed elephants, and of course face painting. 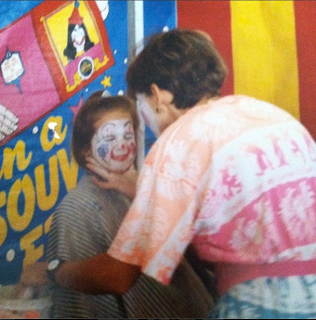 I also would force convince my too kind for her own good Nana to wear masks and costumes...the entire day. 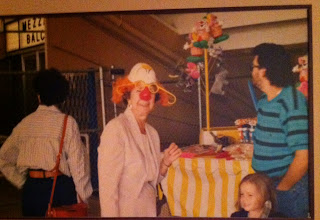 The year I was about 4 we made our way in to the tent, found our seats, and prepared to be wowed like usual. As soon as we were situated, the show began. First the trapeze artists made their way to the stage; then the jugglers; and then...the MIDGETS. I started screaming and yelling and clapping with utter excitement and squeal-screeching at the top of my little baby lungs "MIDGETS! Look at the MIDGETS!!!! Mommy do you see? Look daddy MIDGETS!"

My mother's look of horror couldn't be contained. She immediately reached her arm to cover my mouth while my dad kept trying to whisper "No, no, Meggie, those are little people."

"They're MIDGETS! I love them! Look Look!"

Poppy was laughing so hard he almost fell out of his chair and my sweet loving Nana just sat with her hands over her eyes. People in the crowd were staring, some laughing, some disgusted.

As for disrupting the events on stage? Well, the show must go on and that it did. A few looks from some of the performers mostly. We beelined for the car so quick as soon as the last act happened and yes, we did go back the next year. We had a nice talk before going in too.

Until we meet again,
M