Tales of my fabulous engagement ring

August 13, 2014
I love my engagement ring to death. I love the story of where it comes from, how Hunter went about designing it, the sad but "everything happens for a reason" part of the story, all of it. Since I am such a die hard costume jewelry wearer on the daily, Hunter loves that he is the one to find a piece of good jewelry I will wear every day. Which is rather impressive, seeing as I have a beautiful collection of real goods from the span of my almost 29 years on this planet. I still have my first ever little bambino gold bangle even. Evidence: 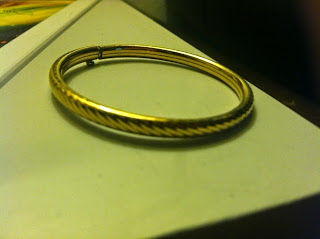 I'm serious when I tell you I was the only 1st grader with pinky rings, real gold bracelets, and some crimped hair at catholic school.

Anyway, two years ago this September, Hunter pulled off the other impossible, and that is surprising me. I am the person who does not let observations go unnoticed. I am not easy to catch off guard, nor do I like not being in the loop on things. See also: previous post about controlling nature I've recently become acquainted with for myself.

Well, he did it. Never before seen footage right here, providing an eagle-eyed view of how it went down. And by eagle-eyed, I mean one of my best friends Andrea being in our loft above, on her belly like a sniper, snapping pictures and taking video. 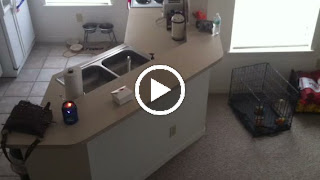 Good times. I am such a difficult human being. Moving on, my ring was beautiful, vintage, and built together with a private jeweler, who is a family friend of Hunter's. The diamond came from a brooche that belonged to a woman with ties to English royalty. It was one of the outer ones of the setting and had a gorgeous glimmer to it. The band Hunter chose slightly resembles the arches of an M, so Hunter explains this as why he liked it. 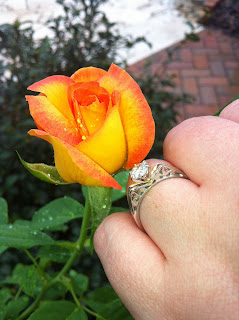 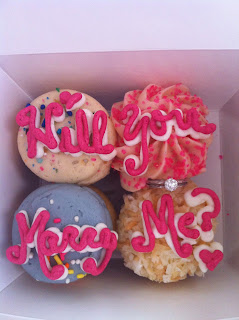 Flash forward from the proposal, to two weeks shy of the one year anniversary of me receiving it. One evening right after work, I was being the good already wife I am and stopped at Toojays to grab some roogahla and turkey sandwiches. As I left the fine establishment and placed my hand upon the door to open it, the setting sun reflected against it and provided extra sparkle bouncing off of it. I smiled at the gem and got to my car, a mere 100 feet away. Once I secured the sandwiches in the seat belt (can't be too safe with that deliciousness after all), I drove to the exit of the shopping center and glanced down at the light. AND MY DIAMOND WAS GONE! I swear all thoughts left my mind and complete horror washed over my being.

I called Hunter frantically and we met right back where I had been parked and scoured the ground, my car, my person. We even talked to management at Toojay's to see if anyone might have turned something in. We prayed, meditated, hummed, and told my mom to light some candles at church immediately. No dice. We stayed well as the dark rolled in, armed with flash lights and hope. We went back the next morning and night too. No go. What was so strange was that I didn't bump my hand on anything, and literally it was 100 feet of distance I traveled from the last viewing I had of it, leaving the restaurant. This made the ordeal even more frustrating.

It was like we grieved. Besides the beauty it held by look, I was most devastated because the meaning behind why I even had it made it the hardest part to deal with. I love the whole story I've shared here, how Hunter decided to propose on a whim, literally on a Monday and by Thursday he had a ring and a plan in motion. Crazy SOB, yes, but adorably passionate absolutely. That he chose every detail for it with such thought. Losing it plain sucked.

We didn't rush to replace it. We waited almost 7 months to decide how we wanted to go about this in the part two segment. Since Hunter used a customization with a private jeweler like he did, there was not a simple replacement plan. We naively did not insure it separately either. This is one of those definitive moments in life of "DOH!"

We contacted Mr. Black, which definitely sounds like a suspect in Clue, and got him searching through his collection for a new diamond and once she was found, we had the best of best inspectors do a thorough new setting, with extra reinforcement and hold power. The day my girl came home to me, well actually she came to work. Hunter went to pick it up midday and mama wanted her rock so I flew out of the office over to his and I could be wrong but I recall "Gimme, gimme, gimme" was used. Excessively.

Things have a way of working out, because once we had the final new ring checked out, we learned it is an incredibly rare diamond. Since it was chosen in the manner it was, it was more about the size and fit and all that jazz. It just happened to be a little extra special once officially examined. BAM. 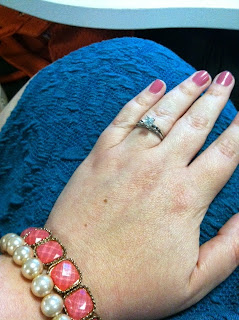 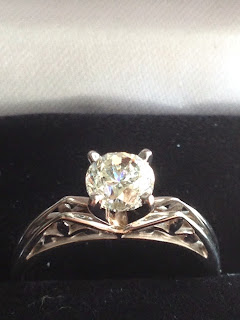 Oh, and for the record, the turkey sandwiches did help with the sting on that awful night. Bless you, Toojay's.

Til we meet again,
M

April 19, 2018
We all hear the buzzwords self care more than ever these days. Every where you turn, a lifestyle blogger, health guru, or magazine article shares insight on ways to treat yo self to some basic T. While I love modern discussions as much as the next girl, I’m aware sometimes it just doesn’t fit and you have to reset what isn’t working. For example, some weeks I am just done by the tine Friday hits. Hell, a rough Wednesday or Thursday has crept in there, too, requiring a pause and reflection for how best to naturally beat a funk or a “feeling of less than stellar”. Here my top self care reset ideas for your consideration: Drink water: Warm it with some lemon, try some green tea for an antioxidant boost, or just plain old room temperature is a sure way to get the boost to feeling a bit better. Face it: Fewer things feel as good as a really great face mask. I love charcoal in particular lately and always feel refreshed and restored and ready to ‘face’ another day. See w
Post a Comment
Read more

Blogtober Day 26, Who would play you in a movie...

October 26, 2014
Ohhh good one, Blogtober. Someone once told me I reminded them of Drew Barrymore. They didn't say if it was for look or personality, so I'm not sure where they drew the conclusion from. See what I did there? I threw this out to one of my very best and oldest friends Andrea. Talking it out, we agreed that Drew and I do share some similar qualities, both in personality and in dressing and accessorizing. Andrea reasoned that Drew is quirky and a little less traditional, much like me. I reasoned we have the same headbands: via I also recalled that when I was a little girl, everyone thought I looked like a young Drew Barrymore. Both my parents have said people would come up to them all the time and remark on my resemblance to her in that movie Firestarter : via via Whatever it is, I would absolutely be pleased if Drew played me in a movie. Now, if Penelope Garcia was a real person and not a character on a TV show (Criminal Minds), she would undoubtedly play m
4 comments
Read more