A tisket, a tasket, a celebration basket

June 29, 2014
Hunter and I hit the ground running to find gift ideas for his mom's birthday and Father's Day for his dad, which happened to both fall on June 15th this year. After searching and agonizing over blah ideas, I decided we had one choice. We had to head to the land every lost girl finds her way to, in hopes of better tomorrows and a little bit of everything you might need. And clearly, that choice was Target.

We found a fabulous gray and white basket, over sized enough to store or decor with, yet small enough not to be a chunky, get-in-the-way thing. We proceeded to troll through the entire super world of goodness for a little grab and bag. We came up with a medley of 'his and her' and 'his or her'. We threw in fun snackies and food like trail mix and popcorn, gnocchi and a specialty sauce, and beef jerky. 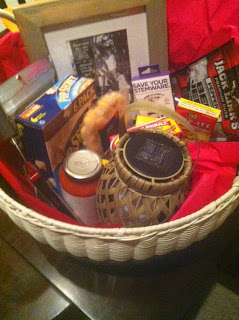 Among the knick-knacks we scored, my favorites were the coral and teal summah time S&P shakers, the picture frame with changeable captions (a cute expression about family was initially on it) and the lantern that happens to match the basket and frame. But my most, most, most favorite would have to be the Pop It's! I said to Hunter "When was the last time you went out and played with those things?", in order to justify why his parents would want them. Argument won as he promptly turned and said "Well, we need some too."

My mom always made gift baskets for people. They would not only house the coolest gid-gadgets, but she would make them look so beautiful. How fun when someone truly does not know what to expect in that basket! And getting one? It's like being a little kid again going through a toy box.


Have you ever crafted a gift basket or received one? Tell me everything dolls!


Til we meet again,
M