You know, our dogs are obviously a huge part of lives. We are those dog parents who take Christmas pictures, some years we aren't even in the picture like here: 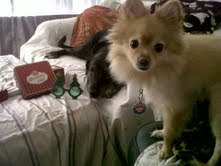 We give them treats for simple polite behaviors like sitting on command or in Roni's case sitting after spinning only 4 four times versus ten before plopping down; we love on them, we baby them, we cherish all the fur we find even after we've lint rolled ourselves practically raw of material or scrubbed the grout along our tubs that collects it, DESPITE them never being allowed in the bathrooms. When they do something bad and they know, they BOTH roll over on their backs for a belly rub. Yes, that's correct. What else do these two assailants do while we dote on them, clean up after them, feed them a daily dose of mixed in scraps of sorts and at the very least organic wet dog food? 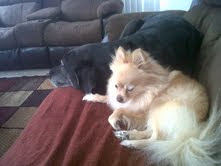 B is for bitches: 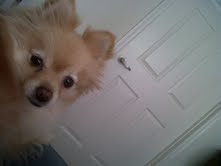 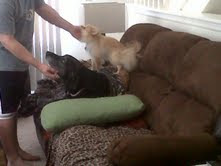 And D is for despicable: 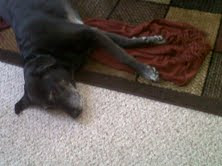 I mean, it's a wonder we haven't come to our senses and started to enforce a little respect and a little less "I'm a dog who lives like a human who has complete control of my humans because I'm cute and/or cuddly. Can someone hand me my Roni look alike doll?" 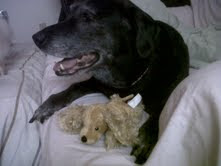