January 08, 2012
Today is my Poppy's birthday. This is our first one without him. He would have been 81 today. So hard to imagine he's now merely above us all watching and tsking and shaking his head when I take my weekly sip of a soda. He always picked up a can or bottle and would read the label and say something to the effect of "garbage" and "everything you put in your body comes out in one form or another." As I've gotten older and over my "I hate authority or anyone telling me not to do something" adolescent phase (I think) I appreciate it more than ever.

I think I miss his wisdom the most. He was so insightful and thoughtful when he answered questions about anything. Like all good Poppys, he always had a story to accompany his answer. Sometimes two stories, and you would remind your self you asked for this. He never lost his patience with reteaching a lesson. He always acted like it was the first time he taught you something.

Poppy taught me that there is no such thing as the word "can't"; I had to eat breakfast, without "no gas in the cah(car), there was no way of moving"; to speak to people and address them by name-never, ever refer to them as him or her especially in their presence; the only thing to fear was just that. You're afraid of the dark? So turn on the light! He taught me how to balance on a beam and keep my focus without falling. He taught me to "put my dukes up" and how to tuck my thumbs so they wouldn't get injured despite me always being a girly girl who didn't exactly come across as Million Dollar Baby. He taught me that I had every right to speak to anyone as long as I did it with respect and looked them in the eye. I had a voice and I could use it. And probably most importantly, he taught me how to make lasagna. This is something we absolutely all benefit from, if I do say so myself.

His willingness to always stand behind you was also pretty great. When I decided to move away from home for the first time, it was mildly sporadic. I had talked about it and planned to do so when my A.A. degree was complete but one day it was like I realized it was now or never. Being my mother's only child she more than went ballistic when I showed up at home with a lease I needed her to sign, like now. "But mom, it's due this week if I want to lock in a place for the Fall!!!!"(By the way, Fall was just weeks away, no big deal, right??) Looking back, yes I would say I could have thought my approach through much better. As my mother and I argued back and forth about timing, readiness and so on, Poppa just sat in his chair smiling at my courage and staring blankly at my mother's negative retorts. Once I stormed off to my room for the tenth time and had no more points to make, Poppy intervened. He told my mom if she didn't realize her mistake and lack of support she would be sorry beyond words. He also told her he would step in and sign the lease if she didn't by the end of the week. He helped my mom realize her time was done to prepare me and it was time for the next chapter for all of us. She of course refused and told him he better not dare. The next morning, the lease was signed, by my mom, and on the fridge when I woke up.

Poppy didn't get past an eighth grade education. It was always so funny to me to hear how when he actually answered 'Here' in attendance the teacher was shocked and didn't believe he was him. He would play "hookey" and go sit on top of his building in Brooklyn and have a doughnut with milk while watching the sun come up. That to him, was far more of a learning experience. For him at least. He was such a strong advocate for education and at the very least I sleep well knowing he saw me graduate college and my only cousin on that side, his only grandson, his namesake, graduate high school. He was so proud and that is something I absolutely find comfort in. Not able to make the commute two hours away to physically watch me walk across the stage, my mom called him in time to hear my name announced. When I called him afterwards, "You did it, darlin'! You're a college graduate!! Ain't no dummy like your ol' Poppy," was all he kept saying. No dummy indeed, that man was smarter than most with years of official education.

Some of my most prized memories weren't always without being a pain in the behind, as he would say. When I was in high school, my friends and I would be so bored we would use our cell phones to prank call him on our house phone. We would call him and pretend we were the county jail and I was an inmate or we were reader's digest with "a terrific offer for Ralph." I suppose I should mention he had been deaf by his doctor's hand since the early seventies so calling him on the phone in general was a real treat for many. Add in his smart-ass teenage granddaughter and wa-la! We had chaos ensuing, my mother yelling "Dad, it's just Megan and her friends being idiots,"; "Megan, if you don't stop right now, you are seriously sleeping outside!" Poppy would still be telling my mother the police got me and trying to put his adorable little sneakers on to go get me out of "the pokey." When he would catch on to what she was saying the next thing was for him to yell for me to get out here and "come see me ya little bratya!" I think he admired my humor overall. He would always laugh his big, deep belly laugh and shake his head.

His Brooklyn accent and expressions haven't become lost. That I am extremely thankful for. The way he would call people Pahtnah, as in 'Hey Partner'; his joyous exclamation of little girl! when he wanted me to come to him; the names he gave to my friends that we still use today like Lucy, Dizzy, and how he would watch through the front window for them to arrive and would ceremoniously announce "Lucy's here!!!" By the way, her name is Lacey. But she sweetly accepted her new name and would refer to herself as this when speaking with Poppy. I can hear him beckoning for my mother: "Kath...Kathy...Kathlynn!" He would walk past the buffet at a Golden Corral and take some cookies on his way out and pass them off to my Nana, then my mother and even me and say "Put these in ya purse." Same story with jellies. He would sit down at the table and say "whatta you want, ya lil bratya?" and rub my arm as he sat. He loved my cousin and I. He called out proudly every time he could when he had "my grand-babies" and he was taking us to (insert here the many trips we went on because of him). I hear the way he would tell a story and he would burst into laughter at his own ending and chuckle so hard it was contagious. He was a funny man and I don't think he even knew it.

I'm incredibly thankful the last time I spoke with my Poppy, I told him the possibility arose for me to venture to NYC Fashion Week through one of my writing gigs. He was delighted, elated and the pride in his voice made me feel like the snazziest heels on that runway. That was three days before he passed away. Although I didn't end up going I find comfort in knowing he had the thought of me making it there. and I also know when I do get there in the coming years I will stop for a moment before sitting down at the runway and take a second to smile for him. Time will have stood still and I will be back to standing outside of getting my Press photo taken telling him about this opportunity.

I hope today on his birthday Poppy enjoys the races and "a lil something cold to drink." I hope The Shadow is on the radio and he hasn't misplaced his hearing aids again. Most of all, I hope he feels how loved and appreciated he really was and how very much he is missed every hour of every day. 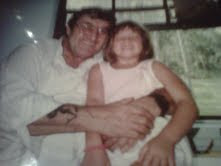